Now that we are in the post Roe era - what's next?

On Friday, June 24th, the Supreme Court struck down Roe v Wade making it the first time in history that they took away rights as opposed to adding them.  What bothers me most about this is that we have the will of a few imposing their will on most of Americans.  There are people (women included) that cheered for the victory of the overturning of Roe v Wade. But there are massive protests as a result of the Supreme Court’s decision to nullify a right that should rest between a woman and her doctor.  The conservative judges are making decisions based on their religious convictions as well as their personal beliefs. The decisions made does not reflect the will of most of the American people.

What I am realizing is that, like it or not, we are in for a rude awakening as to what we thought our inalienable rights are. Women thought that they would always have access to quality care if they should require an abortion. It does not matter the reason because that has nothing to do with you, me, or the Supreme Court.  The only people that should be involved in that type of decision making should be the patient and the doctor.  Or so we thought.

And now that the Supreme Court has made the decision (for whatever reason) to take away a woman’s right to choose, I wondered aloud what would come next on the chopping block.

And sure enough, I was correct. Justice Clarence Thomas mused that perhaps they (the Supreme Court) should come after contraception, same sex marriage and same sex relations (what goes on between two consenting adults behind closed doors.)

My husband and I have built a life together where we are happy, content, comfortable and completely under the illusion of safety. Clarence Thomas does not have the right to take away who I love and choose to build a life with.

I am angry for the millions of women that went to bed on Friday night (June 24th) with one set of rules and woke up the next day under another set. I understand the need to protest…but at the end of the day, protests only get you so far. 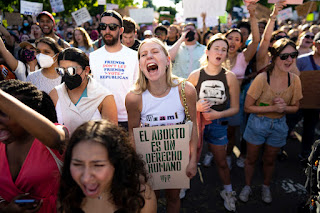 The authorities know that most Americans oppose this new legislation.  They simply do not care.

And why don’t they care?

Because we have mid-terms coming up and several Trump loyalists have campaigned and been placed in positions that could assist the former president in overturning an election should he lose.  This is not democracy and if you don’t believe in democracy, why would your campaign operate within the realms of our constitution if you have no intentions of upholding those same constitutions?

We will have to live with the outcome until the presidential election in 2024. When that date arrives, we will see just how far the Republicans will go to steal/win an election. It seems like nothing is beneath them. What motivates them is to win at all costs and to be damned with honesty, integrity or even what the American people want; all the attributes that someone elected as a public servant should hold near and dear to their hearts.

Instead, we have a smaller minority trying to impose their will for whatever reason on the larger majority. This is coming in the guise of what they believe their religious affiliation affirms and that this is the appropriate action to take regardless of the protests.

After all, protesters will eventually fall away until the Supreme Court does something else to take away another right that you hold personal.  Perhaps you (like me) are in a same sex relationship/marriage.  Do you think that it’s fair that a small group of people can decide to take that right away from you simply because their faith and personal beliefs tell them that it is okay for them to do that very thing?

I think that we are standing on the precipice of our once great nation turning into something that we will not be able to recognize in the near foreseeable future.  I get the feeling that the Supreme Court will nullify certain rights that most Americans enjoy regardless of how we feel about it.

The other piece to the equation is that the Democratic Party does not appear to be fighting for our democracy as hard as we would like.  I’m waiting for the message – one that would combat the clear message that the Republicans are presenting.

This is an issue of control.

We are living in an uncharted era where the minority has figured out a way to weaponize our very institutions under the guise of doing the right thing based on their personal beliefs.  We are living in an era where we are deeply polarized; where we simply forget that before we are anything, we are Americans.

The problem with that is that we are seeing just how unjust some of our laws are.  A woman should be allowed to make decisions regarding her own body without the interference of an old white men who know nothing about having to make a choice on whether to have a baby or not.  What goes on between same sex or opposite sex couples is between those individuals and it is not the business of the courts or Clarence Thomas.  And my marriage is exclusively mine.  It took me most of my life to find the man that I believe I was meant to spend the rest of my life with.  A conservative justice would know nothing about that, nor would he/she know anything about the tremendous hardship they would create for not just me but for the millions of same sex couples in this nation.

Your religious beliefs are not a weapon for you to use to punish or prosecute people for being who they are.  Yet it seems so easy for some to disregard and devalue any group or community that they don’t belong to by literally rallying like minded people into a fervor to ostracize that group.

I don’t know where we are going to land, but I guarantee that it will be a rough ride before we come to a full stop.