I was three years old when the Civil Rights Act of 1964 was created. People of color and their constituents fought the idea of white dominance and suppression. People of all colors lived and died so that the preamble of the United States Constitution blanketed everyone in spoken word and deed.  We trusted our elected officials to do what we sent them to congress to do.  We thought (perhaps foolishly) that the idea of white supremacy would die down slowly with the implementation of the Civil Rights Act, which is why I find it unfathomable that we are in a similar position now as we were then. We have been fighting this battle now for over fifty years.

The fight is real and the response from whites is just as visceral now as it was then.  We are finding out that the idea of white supremacy did not die as much as it has evolved.  Just like people, our ideals have become something that is ingrained in us.  It forms our core beliefs in who we are as well as what we want to be.  And yet despite all of this, you would think that we changed into a better people.  For many of us, we have and for a small portion of us, we have not and perhaps never will.

I started paying attention to politics back when Clinton was in office.  I watched the fiasco of the Clinton/Lewinsky scandal unfold before the world stage.  I was a little taken aback about how quickly the primeval instinct of the Republican party’s response would be to his affair, clutching their pearls and quickly taking the moral high ground.  They did this not knowing that twenty years later, the people would elect a morally bankrupt man who would turn America on its ear.

Simultaneously, we had the realization that the country was rapidly becoming black and brown.  This would lead to a clash that would culminate with the election of Joe Biden as the 46th president of the United States along with a vicious fight for our democracy.

The Republican party has become something that I hardly recognize anymore.  They used to reflect conservative values; and even though I interpreted that belief to be more about being socially conservative as opposed to fiscally conservative, that belief has fallen by the wayside and in its place is something that is starting to look like autocracy instead of democracy. Even as you read this, the Republican party is pushing out 253 pieces of legislation to restrict voter’s rights in 43 states across the country.

Is America pro or con the idea of voter suppression?

So how does America feel about voter suppression?  That depends on who you ask.  For the average black and brown person, the response is quick.  They stand against it because they will not tolerate something that restricts their right to vote.  For the Americans that support the current Republican party’s endeavors, the silence is deafening because no one wants to admit that they support (whether secretly or not) the idea of restricting the right to cast a ballot especially if those casting said ballot is black or brown.

Most recently, Governor Brian Kemp of the state of Georgia signed into law the following:

“The new law imposes new voter identification requirements for absentee ballots, empowers state officials to take over local elections boards, limits the use of ballot drop boxes and makes it a crime to approach voters in line to give them food and water.” CNN News 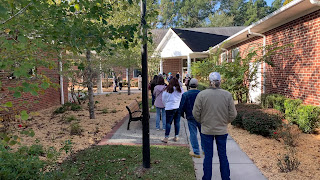 Put another way, the Republicans want the option to severely limit black and brown turnout for fear that they will never win another election...at least not anytime soon. Rather than come up with something legislatively that would win over Americans, Republicans would rather cheat.  They want the option to choose who wins and who loses the next election.  What this means that if their nominee wins, great.  If their nominee does not win, then somehow, the opposing party cheated…something that they are trying to do right now.

This is nothing new from the Republican party, but it is the first time that they decided to embody the merits of Trumpism as opposed to standing on the right side of morality and fairness.

I have been accused of being part of the far left although to date I have never been linked to any conspiracy theories; at least not yet.

I am not a part of the far left.  I stand firmly on the side of what is right and wrong.  Hopefully, we all know this…white, black, and otherwise.  And yet, we have people that will turn a blind eye to what is wrong in the name of what I believe to be for nothing more than whiteness.

The sins of whiteness

White people have fled neighborhoods when people of color moved in…as if somehow, we would inflict some disease on them if they stayed to get to know us.

I say this as if I need something from white people…and I do.

I want you to be me for a day.

Or even better, look at yourself from the outside in and ask yourself the question, “Am I really living up to the person that I want to be?”  “Do I exemplify what is good, fair and decent as I say I do?”