When will things change for African Americans?

I went to church to pray today.  I prayed for the change that is so desperately needed in these challenging times.  As I settled in for prayer and listened to the readings of the day, I was struck to my core by the homily that Reverend Sean Lanigan had to say.  It echoed a sentiment that I have carried with me throughout my life.  In his homily, he addressed the issues of the day...the senseless killings in Minnesota, Louisiana and Dallas.  We have all lost something in these events.

White American may feel like they lost something in that five white police officers who had taken the oath to serve and protect lost their lives doing the very thing that they have sworn themselves to do.  African Americans lost yet two more lives to senseless violence at the hands of the very people that have sworn to protect us.  There is a sense of outrage, fear and frustration as we move forward into the aftermath of these events.  Many of us are at a loss as to what to do with the emotions that churn within us.

But what Reverend Lanigan said was a message directed at white people.  Although you are not directly responsible for the loss of life that occurred in Louisiana and Minnesota, you can do something.  Feeling guilty is not the answer, for to feel "white guilt" is to give yourself a pass to do nothing.  What he meant by that was if you as a White American allow yourself to feel guilty over the circumstances that have been in place for many African Americans for centuries, then you are in essence saying that, "I feel guilty, which makes me better than the person that feels nothing...and because I feel guilty, that is an excuse to take no action at all."

I walked up to Reverend Lanigan after service and told him that as an African American man, I have been the victim of  passive racism (if there truly is such a thing) for most of my adult life.  That racism came in the form of being stopped by police officers in New Jersey for doing nothing more than driving a nice car, to being passed over for promotions because there was always a more qualified "White" constituent who could do the job better than me...to being told by a supervisor a few years back that I should be happy that I have a job when I was given the promotion that I was due, but the raise that came with that position was given to someone else.

This is my personal reality...a reality that may of my white brothers and sisters will not understand because it is not a part of their reality.  The fairness that all are entitled to is not experienced by all.  And the undercurrent of racism is so entrenched in American culture that it is easy to overlook if you are not the victim of its practices.

Racism is not as overt as the tragic killings that occurred in Louisiana and Minnesota.  Most experiences of racism is actually difficult to prove...but if you are on the receiving end of it, you know it when you see it.

I don't blame all of my trials and tribulations on racism in America, but at the same time, I am smart enough to know that many of the issues that occurred happened because I simply did not fit into a demographic that would allow me to move forward with ease.

And now, I think about my commute to work.  I think about my three younger brothers who are all good, law abiding men and yet I know that they will always be seen as "black" men first.  And honestly, I don't know what that means anymore.  If I say the wrong thing or move the wrong way too fast or too slow, will I be accosted and thrown into jail?  Or worse, will I be shot because my actions were somehow perceived as a threat, even if the threat was only in the mind of the person that stopped me in the first place?

I think about my mother as well as all of the African American mothers out there who have sons and had to groom them for a life that they knew would present challenges for them. They knew that being black in this country is not always an asset.  And this is something that some white people will never understand.

A white mother does not have to prepare her children for the likelihood that her child's life will be made more difficult because of the color of their skin.  Some white people may not want to hear this...but simply because they don't doesn't make it any less a fact

Right now, millions of black mothers are in fear for the safety of their sons and daughters.  My mother is one of them, even though one of her sons is a police officer.

What happened in Louisiana and Minnesota was tragic.  What happened in Dallas was just as tragic.  One incident does not outweigh the other for to say that it does means that someone's pain is greater than someone elses.  Pain is pain.  Hurt is hurt.

Tears that falls from a mothers eyes, regardless of the race of the woman still reflects a broken heart.  Now is the time for a serious dialogue and then the appropriate action to follow behind it.  People need to understand that there is not a need for "White Privilege."  And my white brothers and sisters need to understand that it does exist.  As I said earlier, it is so entrenched in American culture that if you are not on the receiving end of it, you would not be able to see it; and if you can't see it, how will you know that it exists?

I'm not telling you that this is a problem that will be eradicated overnight.  The problem did not appear overnight and it will  not dissipate overnight.  It will be difficult.  The reason why it will be difficult is because many of my white brothers and sisters will not acknowledge that there is a problem and would like to see things remain status quo.  Honestly, if I were part of a demographic that had an edge simply because of the color of my skin, I don't know how quickly I would want to give that up either.

Because at the end of the day, all lives matter!!!

I have never viewed myself as extraordinary.  I never thought that I would amount to anything great or do something that would make a difference in this world...no matter how much I wanted to.  I've been around people that have said, "Yes...you're going to make it because there's something in you that won't let you fail."

Most times, I would smile and nod...say "thank you" and keep it moving because I didn't believe it.  Not for one second.  The reason I didn't is because I knew the man in the mirror all too well.  I was well aware of all of my shortcomings; shortcomings that were magnified to the tenth power by my experiences.

I had accumulated scars that left deep welts in my psyche.  And yet everyday, I would plaster on a smile and ignore the ache that I had become accustomed to know so intimately.

Pain is a funny thing.  If you lose someone that you love, the ache will be brilliant, hot and it will feel like it will never go away.  It will weigh on your heart until you learn to live with it.  It will seem like you can't...until you do. 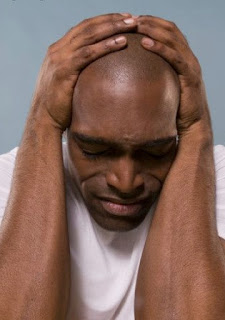 My pain became a part of me.  Sometimes, I wore it on my sleeve.  Other times, I pushed it so far back that I almost forgot that it was there.  But it never went away.

The mistakes that I made were magnified to the point that on some days that's all I saw.  It was my reality.  Mine and mine alone.  It never occurred to me to wonder why I felt the way that I did.

It never occurred to me to wonder why at various times in my life, I was so socially awkward that it was easier to drown myself in anything that would numb that pain than it would be to face reality.

There are thousands of men like me.  We carry pain with us and hide it behind our masculinity.  We hold things inside until they explode and then we wind up hurting someone...even if that someone is ourselves.

We push people away without knowing why...perhaps the very people that we want and need to be closest to the most.  We drink too much.  We do drugs.  We indulge in too much sex with anyone and sometimes punish that person because we don't love them.  We may become so engrossed in work to the point that work may seem like that is the only thing that matters.  We cheat on our loved ones, not because we don't love them but because we really don't love ourselves.  And when all else fails, we snap out into a rage over things that may be inconsequential and we don't know why.  In the silence of our rooms, we may even shed a tear only to wipe them away and hide behind our masculinity once again.

We do this without a thought because pain no matter how great or small has become one with us.  We don't talk about it because to talk about it would be tantamount to being weak.  Instead, we continue to live life in  the sense of normalcy that we have always known, even it isn't correct.

So what do we do?

What happens to the idea of white supremacy?

For a couple of months, I had peace of mind.   I could turn on the television and not get upset.   I normally reserve my emotions for co...