I have been trying to understand how our nation has become so polarized.  I've been trying to wrap my head around how I suddenly have so many people that are my enemies instead of people whose political beliefs differ from mine.

I can understand why people choose to stand behind their political candidate.  That candidate, after all, embodies what they believe.  They have placed their hopes for the betterment of this country in that candidate and believe with all sincerity that the candidate will be able to deliver on what ever promises have been made not just on the campaign trail, but also also during their tenure while in office.

Right now, the political climate has been denigrated to an "us versus them" mentality.  We spend more time fighting one another...challenging the other party's intentions and motives as opposed to coming up with viable solutions that will serve the American people. 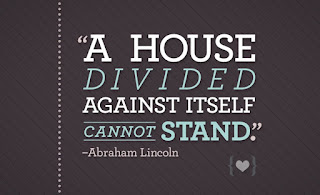 One of the correlations that I see with our current president and the people that support him is that in the course of being patriotic and moving forward with his (or their) agenda, they have to have an enemy.

I don't think that a day has gone by where the president has not attacked or lashed out at someone, even if it is member's of his own party.  And likewise, his supporters also lash out, sometimes in his defense; sometimes in support of his policies.  But the common thread is that someone has to be an enemy.  It's something that I see over and over.

When I listened in part to the president's speech to CPAC yesterday, I lost interest when they started to chant "lock her up."  This chant, which was so popular during the 2016 campaign is still prevalent today even though the campaign ended over a year ago.

Someone has to be an adversary.  Someone has to be the brunt of an attack because the president and his supporters may feel as if they are under attack.  And so they lash out.  Over and over again.  But I realize that the issue at hand isn't just because of party affiliation and a difference of opinion.  What we are living in goes far beyond that.

We are spending more time focusing on our differences than our similarities.  We have honed in on what we believe and that somehow, that translates to the fact that we are always right and that our adversary is somehow always wrong.  And when we take that approach, we become a nation that is divided against itself.  And we all know that a house divided against itself cannot stand.

We can agree to disagree.  But the moment that we try to silence the other party in their message, whether we believe that message is right or wrong, we become complacent...that is, we are comfortable with having enemies.  We are happy with "us versus them."

While I will never be a supporter of this current president,  people need to understand why there are those of us that will not.  Maybe the dialogue that needs to take place isn't so much around the differences of opinion, but why we have those differences of opinion in the first place.  Because if we can have that, maybe, just maybe, we can mend fences and find solutions that will better all of us as Americans.

I say this because our enemies are watching us.  And they are waiting.

Because remember, a house divided against itself cannot stand.