Instead of looking at our past, we can look to our future

Every time an incident takes place that shakes us to our core, one of the first things that I hear is “This isn’t America!”  At one time, I was foolish enough to believe that this was true.  Whatever took place…whatever shocked us into temporary silence is a direct contradiction of what America truly stands for.

But what we are seeing is that the events that took place on Wednesday, January 6, 2021is as un-American as it gets.  The sad part about this incident is that it is true.  This is America.  As painful as it may be to many of us, this is America.  We are a nation where a third of us believe that they have the inalienable right to dictate to the rest of us that despite who we elect to office that our voice does not matter.  Sadly, they believe that their voice has been silenced and that they have the right to protest and in doing so, destroy and terrorize our elected officials that works in our nation’s capital.

In a post Trump era, Trump has become somewhat of an enigma instead of a president.  He has willingly lost sight of what the role of the presidency means as well as the constitution that he has at one time sworn to uphold.  We have all had window seats to what he has allowed this country to become.  We have become the nation of Trump…like it or not.  We are living in Trump’s America.  He campaigned on fear, hatred and finger pointing, all in the name of patriotism which is partially responsible for the insurrection that we all bore witness to three to four weeks ago. 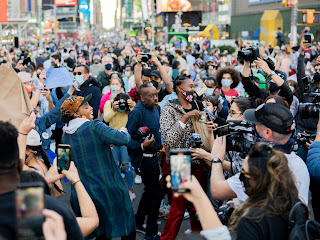 The mayhem that took place is a result of a middle class that feels as if they have been forgotten; a race of people that are threatened by the black and browning of this country, an economy that does not work for everyone and a government that habitually pays homage to the rich.  This is what we see on the surface of what 1/3 of this country believes that this is what ails them.  But there is something deeper at work with “white peoples” pain.  The pain comes from the gradual erosion of the middle class.  In certain parts of the country, there are people lining up in food lines…people that never thought that they would have to participate in a food distribution program

Our problem as a nation starts and ends with inequality.  For decades, there has always been a race of people that prospered at the expense of another.  They flourished with the advent of slavery…and yes, you have probably heard where I am going with this, but for you to understand how we got here, we must understand where we came from.

African American and Indigenous people have been killed, maimed, and raped in the name of whiteness.

Once people of color were freed from the bondage of slavery, we subjected to laws that would further repress us as a people.  This came in the forms of Jim Crow laws.  And while the great migrations of people of color from the south to the north in search of better living conditions and job opportunities, once we got here, we were met with repressive housing tactics and further inequality policies.  This led to mass incarcerations where men of color were jailed for minor drug offenses and given no means to join the working society as upstanding, contributing citizens forcing them into recidivism…or rather, having to repeat the same offenses that landed them in jail in the first place.

“We are seeing racially blended families in the media which signals that now, it is okay to simply be as opposed to being worried about who marries who.” …JL Whitehead

War on drugs was not so much a means of making the ghettos better as it was an unspoken war on black men or men of color.  We were skillfully removed from the household of our families leaving our wives and children to fend for themselves.

I say all of this because this brings us to where we are.  We have survived the presidency of a man who did not believe in equality.  We have survived the policies of a man who wrongfully claimed that he did more for African Americans than any other president when in fact, he rode the success of his predecessor in turning the economy around.  He took credit for it while having nothing to do with it.

But now we can do something about it.

We can move forward as fathers, husbands, brothers, uncles, and cousins with pride.  We can hold on to our dignity as we pursue education knowing that the playing field is as close to being even than we have ever seen in decades.

We are seeing racially blended families in the media which signals that now, it is okay to simply be, as opposed to being worried about who marries who.

I have given much thought about this.  In many ways, I became “woke” during the Trump Administration.  Many of us did.

We realized that many of our fellow countrymen valued being white over fairness and equality.  But the truth is that many of our neighbors’ value who we are and will join us as we move forward into a time of hopeful policies that will lessen the burden on us as a people.

Hopefully, we can rise together as a nation that is not splintered in hatred and hypocrisy.  Instead, we can be better by doing better.  We can be a nation that knows what true patriotism is.  True patriotism is loving our nation which is inclusive of everyone and valuing everyone’s contribution to our ideals and principles.  We can lift everyone and rejoice in our nationalities; Germans, Irish, Dutch, African (which contain many divisions of who we are as a people) Italian, Indigenous and Jewish as opposed to one color.

Folks, this can work.  But we must want it to work.  And the road to success is simple…one group must be willing to give up the power that they have enjoyed for decades and be willing to share it so that we all can enjoy the fruits that this land has to offer.