As a Black Gay Man, this is what I think of Mayor Pete

I like Mayor Pete.  He speaks well.  He carries himself with the air of an educated man who has served his country with pride.  He served with the blissful ignorance of not knowing that the very country he served could have cared less about his dreams and struggles as a gay man.  I don’t know Mayor Pete personally, but I know enough of him to be proud that if elected to be President of the United States, he will be the first person of the LGBTQ community to do so.

Mayor Pete was well into his thirties by the time he realized who he was.  I don’t know what his journey to his true self entailed.  I don’t know how many tears he shed at night before coming to terms with the fact that he identifies as a homosexual.

I shed those same tears.

We are cut from the same cloth.  But while I acknowledge willfully that I am looking forward to seeing how his potential candidacy will play out, I wonder what his nomination will mean for me personally

I came out of the closet in 1979; the year that I graduated from high school.  I was in awe of a world that I had hoped would embrace me.  My world became a whirlwind of disco music, socializing and late nights at the local diner. It also included writing for Philadelphia’s local gay publication, “Philadelphia Gay News.”
I found out very quickly that I was not welcome in all circles of the gay community.  I found out that the same group of people that welcomed me also rejected me.  I found out that some aspects of the gay community shunned Black and Latino gays by implementing questionable carding practices to keep their patronage white.  I found out that youth was not always the sign of beauty; unless that youth was white.  I became acutely aware that racism had nestled itself quietly within a community that I thought I belonged to.  Ads that ran in local gay publications for men seeking potential partners were often followed by the descriptive, “No Fats, no Blacks, no Fems.”

And yet, this is where Mayor Pete and I come from.  So, I wonder if he is capable of seeing me; a part of his community that needs to be represented just as much if not more than the white gay community.  I am curious if he can represent me as my voice (and people like me) will be raised in the hopes of his becoming our nominee for the presidency.

"We are cut from the same cloth.  But while I acknowledge willfully that I am looking forward to seeing how his potential candidacy will play out, I wonder what his nomination will mean for me personally." ~ J.L. Whitehead


And while I raise my voice for him, I silently wonder if he can represent a portion of my community that has always been pushed aside.  My mind wanders to the plight of trans women of color.  I can’t help but wonder if he can truly see the “us” that makes up the gay community of color.

We are tolerated.  But we have not been fully embraced.  I don’t know what Mayor Pete’s stance is on issues that pertain to communities of color.  I don’t know if he will properly represent me as well as people that look like me.  I’m not sure of this at all.  I also don’t know if Joe Biden, Elizabeth Warren or Bernie Sanders will represent me either.  After all, the African American community has grown accustomed to our issues as well as what matters to us being pushed aside.  We are used to our needs and wants being dismissed as casually as someone would swat away bothersome fly on a hot summer day.

Will he gain the support of the African American community?  Will he talk to us and address our needs and wants?  Or would his support of the very community that he comes from condemn his elect-ability?

I’m not sure.  Only time will tell.

I made the cognizant decision to stop writing about Trump.  Over time, I realized that I was perpetuating perhaps even feeding into the ego of a man who does not have a viable moral compass, questionable ethics and at the very least, has no value for all of the citizens of this country.

I don’t have to tell you who this man is because you already know.  For some of you, he is a savior…the great white hope if you pardon the metaphor.  For others, he is a bigot…someone who seems to enjoy inflicting pain on people of color and whose policies reflect who he is and what he believes.
We know that 33% of white America side with, support and place extreme value on Trump.  They take pride in calling him “my” president all the while knowing that his governance does not blanket all the citizens of this country.

This presidency has exhausted me.  The weariness comes not just because of the multitude of scandals that has plagued the White house since his inauguration.  I’m weary of the back and forth between the Democratic and Republican parties.  I’m tired of the scandals that seem to pop up at the end of every news cycle.  But I am mostly tired of this administration’s attempt to convince the American people that what they are doing will ultimately benefit them; that they are doing what they are doing because they are patriots and will lift up the middle class when what we are seeing proves otherwise. Enough is enough.  We have never had a president that has been as enshrouded in chaos as the one that we have in the oval office currently.

I don’t know what the future holds for us as a people.  I would like to think that we will survive this and come out better now that we know that 33% of this country believes in the ideology of “America First.”

But it’s not the idea that America should be first in every single aspect of governance that concerns me.  It is that the ideology is shaping out to be America alone.  We elected someone that would go to the White house and “shake” things up.  We should have known that someone with no experience in being the president of the most powerful country in the world shouldn’t be allowed to learn how to govern on the job.

But we’re here now and short of voting him out of office and not allowing him to have a second term, there is nothing that we can do about it.

We will get through this.  We will survive this.  But what do we do with the hatred that has bubbled to the surface of our nation?  What do we do with the major problem of “white supremacy?”  How do we fix that problem because it’s here, live and in living color?  That has been the question that has resonated in my mind for the last year or so.  What do we do when Trump is out of office because like it or not, eventually that day will come, whether by impeachment, the end of his term or being voted out.

So what will we do? 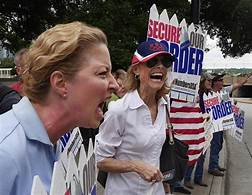