The fight of our lives

I’ve struggled with depression for most of my life.  Depression has derailed successes that I could have had and made them acute failures.  And just when I thought I found reasons to rejoice in my existence comes the resurgence of something that will impact me for the rest of my life.

The message is clear…my life and my presence have no value in this country.

There is so much hatred in the world that it has spilled beyond the closets that they conveniently hid in and have somehow found their way into the mainstream of our society.  It is the norm.  Everybody knows somebody that hates someone for no reason…or rather, most people of non- color know somebody that hates someone for no other reason than the way they look, love or worship. And while some of you reading this may say, “Hey, that’s pretty racist for him to say that!”  To that I would have to say that it only sounds that way.  It may sound unfair; that I am painting one race of people with the same brush and if it were being done to me, I would be extremely upset.  And you may be correct about everything I just said.

We have a white supremacy/terrorist situation going on in this country.  We always have.  It just evolved into a different form of repression, fear, anger, and resentment.  People of color don’t really care who you worship or look like.  Our problem seems to be with sexual orientation…and even now, we are working on that.  But for some of our non-black brothers and sisters, it appears on the surface and by their own admission, there is an unnatural fear us, an abnormal resentment of us and they are mad as hell at a circumstance that we didn’t create.  Add to that the need to stay and remain in power while simultaneously creating a never-ending source of wealth.

But I digress, the ideology of hatred is the norm while the dogma of loving your fellowman has as much appeal as catching an STD.  And while the philosophy behind white supremacy is nothing new, what it has evolved to in plain sight is something that I think every LGBTQ person fears the most…our rights taken away from us.

The dog whistle has been sounded and open season has been declared on people of color, women, Jews, and the LGBTQ community.  Blacks have always suffered at the hands of the police at a disproportionate rate as compared to whites.  Jews, blacks, and brown people have been murdered in their synagogues, at their grocery stores and during routine traffic stops more than any other group of people. 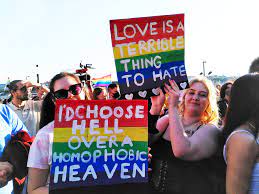 Speaking as a member of both the African American Community and our being gay, I am in fear of what our new republic could mean for people like me.  As a member of the LGBTQ community, I could easily see the right to marry striped away from us followed by our very existence coming under assault by laws making it easier for people to discriminate against us.

As a black man, I am in fear that the only places I would be allowed to live in would be the ghettos created for us in the forties and fifties.  People that look like me may be killed and our murderers never brought to justice all because one group of people has decided to take away the rights of another.

But what do you do when our greatest institution falls into the hands of one individual who elicits the very worst in us…creating an “America First” policy that soiled our relationships with many of our allies?

The ideology behind “Trumpism” is nothing new.  We’ve experienced this type of fear and hatred in the early nineteen hundreds.  America First was created at the turn of the century which refers to a policy stance in the United States coined by progressive internationalist president, Woodrow Wilson that generally emphasizes nationalism and non-interventionism. The isolationist approach gained prominence in the interwar period (1918–1939) and was advocated by the America First Committee, a non-interventionist pressure group against the U.S. entry into World War II. (1)

But America First does not necessarily translate to America Great.  We claim that we are the land of the free, but I realized early on that the saying did not apply to everyone. I foolishly thought that it did, but this of course was when I was a child.  I found out in high school that I couldn’t do or say the same things that my white counterparts did or said.  I lost my summer vacation as a result of this.

We are dangerously close to losing any gains that we have made within the last fifty years.  A similar circumstance is happening with women now where they may not be able to receive the medical care needed should they need to have an abortion.  I cannot say loudly enough that it is not the right of some old, rich white man making decisions for a woman’s body...decisions that will impact all women but poor women disproportionately.

But the Republican party represents something else that I don’t recognize.  Although Trump is not on the ticket for the primaries this year, Trumpism is.  More people are exposing misstatements and untruths about our judicial process simply because they may not like the results of our electoral process. And the ideology is simple…if you win, you’re fine.  But if your opponent win, accuse them of cheating without proof.  Kind of sounds like the thoughts of a spoiled child.  But this is where we are.

I’ve built a wonderful life with my husband.  We are just as happy now as the day we met some fourteen years ago…and I want to stay that way.  We are quiet.  We love our friends, our community, and our church.  We worship alongside one another and I would have it no other way.

Let me be clear…the Republicans do not have a platform to run on.  They have no policies that will benefit the American people.  What they do have is a means to cast serious doubt on an election process that is flawed, but not obsolete…unless they lie, attack and cheat.  They will do and say everything that will make you think that our electoral process doesn’t work…unless they win.

And in that lies my fear.  They stand a good chance of taking back the house and Senate.  And then everything will be in place to hand the presidency to Donald Trump whether the American People elect him or not.

And in all of this lies my fear.

(Comments are welcome at the appropriate section of this op-Ed)