Everyone knows that victims of abuse come in different shapes, sizes and doesn't adhere to race or ethnic background.  We know that some abuse victims remain victims while others move on to bigger and better things. Sometimes, the bigger and better may be something as simplistic as getting away from the abuser.  Others may view going on to bigger and better by forging a safe environment for their children and bettering themselves.  There are the rare few that decide that they have to make it their personal mission to change not only their individual circumstances, but the circumstances of the people around them.

I met Shirelle "Diamond" Hogans two years ago at a literary event hosted in Claymont, Delaware.  I picked up one of her books, read it, and decided to conduct a formal interview with her since the subject matter held my attention with riveting, graphic detail.

As a man, I think that the idea that any man would raise his hand to a woman is incomprehensible.  As an advocate, I tend to think that this type of display of lack of self-control is cowardly...even if the woman may deserve it.  What I mean by that is simple; anyone can push you to the edge of violence.  Ultimately, it's what you do with yourself when placed in that situation which dictates the kind of person that you are as well as what you ultimately will become.

I read Ms. Hogan's book, "Twisted Pleasures" with a sense of sadness and disbelief.  It is within those pages that she describes her own experiences of domestic violence.  She takes her readers on a journey that sadly, may be the reality of many women across the country. 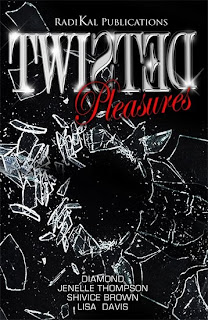 Instead of allowing her circumstances to dictate who she was to become, she became an entrepreneur releasing several books under her publishing company entitled, "RadiKal Publications."  She has played the role of mother, editor, mentor, comforter and business woman while at times not knowing where she was going to lay her head down at night.

It is my honor and privilege to introduce Shirelle "Diamond" Hogans as an entrepreneur that is on the move.  She is a motivational speaker, publisher, author, survivor and now...friend.

You can obtain her books at her website below:

Is this personal?  Yes.  Is it warranted?  Absolutely!  Is it deserved?  Beyond a shadow of a doubt!!