“Us” vs “Them” and why this is dangerous

I had taken a silent vow that I wouldn’t write about Trump anymore.  Hindsight being what it is, I could not write any entries on this platform without writing about Donald Trump.  After all, when you’re dealing with politics, you must include him because our political climate currently revolves around him.

We’ve never had a president that does and says what this one does.  This is part of his charm or lack thereof depending on how you look at it.  Many like his unconventional style.  Many of his supporters believe that he is a man of the people.  They believe that he would sit down with them at a neighborhood bar and have a beer with them.  And therein lies the danger because nothing could be further from the truth.

The main problem (one that is quite evident) is how the president has enshrouded himself in the adoration of his supporters.  He does so at every rally.  He does so at every speaking event.  He does so whenever he gives a highly respected elected official a nickname that is more reminiscent of a schoolyard bully than someone that was elected to hold the highest office in our country.

We have become a nation so divided that oftentimes, I don’t recognize the country that I was born.  Daily, we are brought into a fight that we don’t belong.  This fight is “us” versus “them.”  It has been ever since the election of the 45th president of the United States.

This fight started when the president brought his mentality to the office of the presidency.  In his mind, if you were not for him, you were against him.  There is not a happy medium like our democracy had at one time dictated.  In the mindset of a man whose entire life has been surrounded by “yes” people, you are either for him or against him.  There is no room for a second opinion or perspective.  He will always be right even if that correctness comes at the expense of everyone else.
The voices that would have brought reason and thus that second opinion which is much needed that lends itself to the office of the presidency are gone; replaced by people that will only say “yes” to a man who needs to be right at all costs. 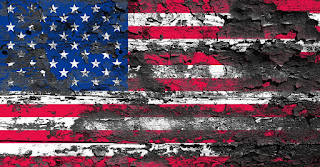 He has identified himself as the “us” versus “them” when he states at his rallies that the democrats are attacking them.  And the people standing in the audience cheer, chanting things like “lock her up” or “send them back.”

Trump supporters have aligned themselves with a man that they truly believe in.  And those of us that do not support this man will only see his flaws and missteps.

We are living through a time where we need to listen to one another instead of alienating each other.  We have become so polarized that we refuse to see the truth…even if that truth is in plain view.
We may view the truth as damaging to either our democracy or the president as well as his agenda.  And that’s okay because at the end of the day, we have to be able to listen to one another.


"We are allowed to have a different point of view but we should be able to come together, air our differences and come up with ideas that will move us forward as a people.  After all, as spoken in the Pledge of Allegiance, it is said “One Nation Under God.”  Think about that for a moment.
We are one nation under God…indivisible with liberty and justice for all." ~ J.L. Whitehead

We cannot be a nation where we are constantly pointing towards each other as the reason why we can’t move forward as a people because right now, there is no way that we can.  We can’t because there is too much finger pointing.  There is too much slandering of the other side while nothing gets done.

We are allowed to have a different point of view but we should be able to come together, air our differences and come up with ideas that will move us forward as a people.  After all, as spoken in the Pledge of Allegiance, it is said “One Nation Under God.”  Think about that for a moment.
We are one nation under God…indivisible with liberty and justice for all.

That is what we stand for.

Or that’s what we stood for because now, we are so divided that we can only see in terms of black and white…sometimes quite literally.

Whether you love Trump or hate him, what has always gotten us through tough times is our allegiance to our nation…not to a man.  We have always allowed the admittance of ideas that may not align with our own, because that is what has and hopefully will always make this country great.
We know that there are people that are pro black and brown people just as much as there are people that are pro white.  This is quite evident given that race is one of the main reasons why this country is being torn apart.  We need to understand that in order to survive this presidency and come out better and yes, stronger as a nation, we must allow for a viewpoint that is not our own.  We must allow for something that is bigger and better than all our collective ideas.  Because regardless of how you personally feel about the changing landscape of our nation; that landscape is changing…and it shouldn’t matter.

I say this because right now, as I awaken in my comfortable bed, there are men still locked up in cages that shouldn’t be there.  There are women who will never see their children again because they were separated at our border.  There are young girls that are still missing who will never be found.
So think about this for a moment.

“I pledge allegiance to the Flag of the United States of America, and to the Republic for which it stands, one Nation under God, indivisible, with liberty and justice for all.”

What happens to the idea of white supremacy?

For a couple of months, I had peace of mind.   I could turn on the television and not get upset.   I normally reserve my emotions for co...