Enough.  Have you ever had a child get on your last nerve and you had to say to them (somewhat sternly) Enough?  That's kind of how I feel every time I see Trump's face come on television.  I imagine that this is how many people felt when they saw Obama in their news cycle.

The difference is Obama did not get on television to bask in the adulation of the people that put him in power.  We have seen Trump in action for almost four years and we've all been witness to the damage that he has caused the country despite the fact that everything he says he does is for the benefit of the citizens that occupy this great land.

There is no humility when he comes on television.  Everything...and I do mean everything is the finest, the best, the most powerful, the greatest that people have ever seen.  And I wouldn't mind that except logic bears that the pendulum swings both ways.  At some point in time, you have to take responsibility when that pendulum swings to the opposite end of the spectrum.  We may not like it, but that's how life works.  At least for most of us.

But I've had enough.  I don't hate the man as I one time thought I did.  Instead, I dislike his lack of moral leadership.  It upsets me that at the end of the day, everything for him has to end in some type of business negotiation...a negotiation that he wins.  Every time.

He surrounds himself with "yes" people.  He has done this most of his life.  He has heard from people near him that he is the most intelligent, most business savvy, the smartest, the greatest human being since the coming of Jesus himself.

I say "enough" because I don't need for the United States to go back to what it used to be prior to his coming to power.  God knows it wasn't that great for people before he came into power.  It wasn't that great for us even when it was supposed to be great for us because the moment that the first black president said anything that would remind white America that he is a black man and he understood the plight black people would make said white America lose their mind.  It wasn't supposed to be that way, but it was. 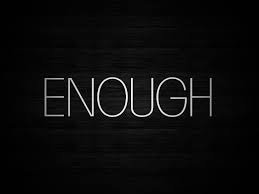 It is said that if you give a man unlimited power, it will show you the true character of who he is.  If you allow a man to get away with actions that will benefit him, his family and friends, you will see exactly who he is.

The problem is, I've seen who Trump is.  I've seen it for almost four years.  I've seen him do things that directly profited he and his family.  And yes, I will say that he has done some good while he was in office.  I'll give him that. I'm sure that his followers can advise me accordingly.

But even with the good that he may have done, it is overshadowed by the useless name-calling, filling his staff with "yes" people, denigrating the office of the presidency so that instead of treating him as a public servant, we are forced to treat him like the dictator that he always wanted to become.

Enough.  The office of the presidency is so much more than what he has forced it to become.  The United States as a whole will never be happy with whoever we elect.  Some will believe that the elected official is too...something.  He or she may be too liberal or too conservative.  We can never seem to find the appropriate medium that would work for everyone.

But for me...today.  At this very moment.  I am saying Enough.